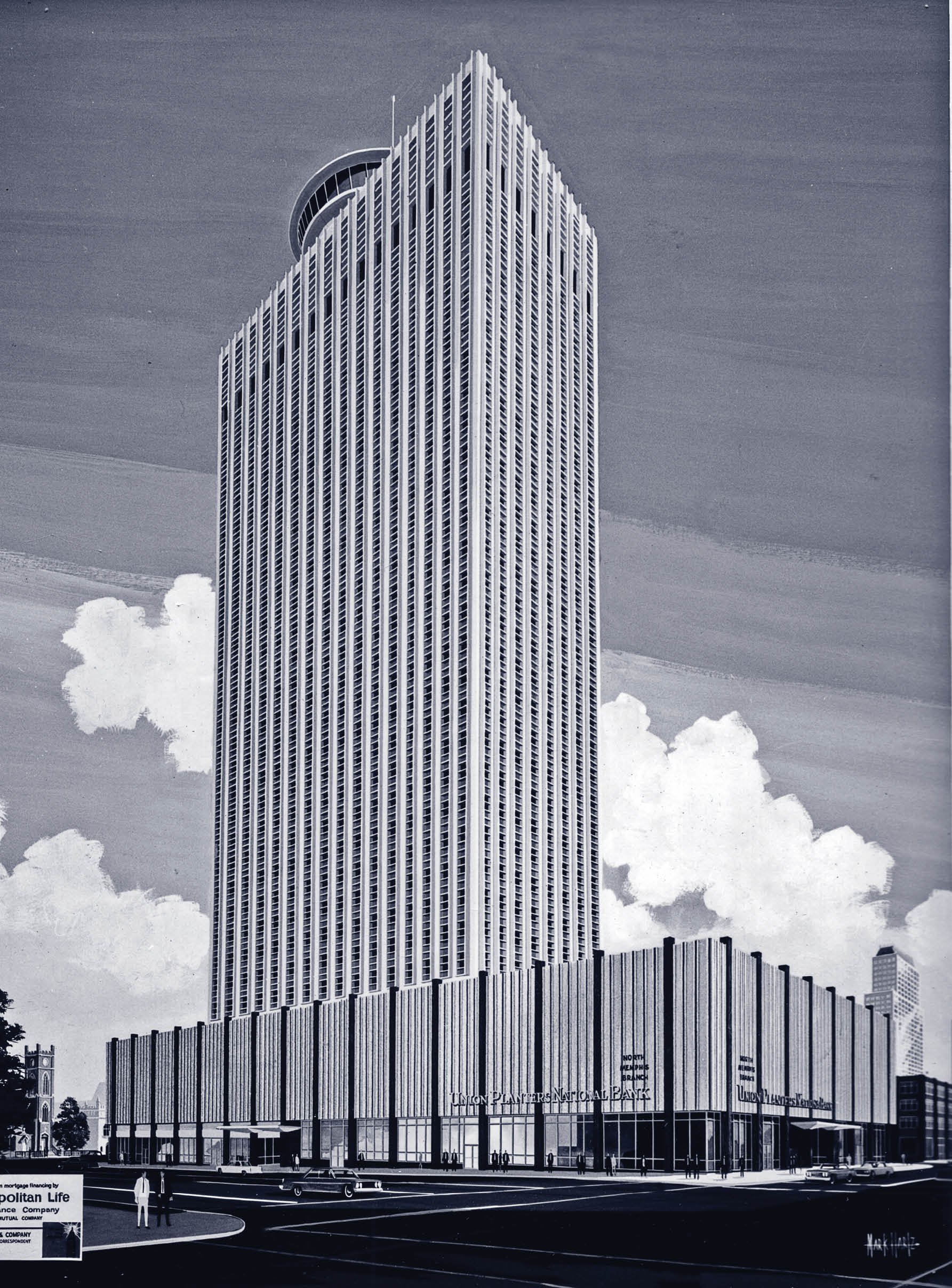 Adaptive Reuse Architecture breathes new life into existing structures by repurposing them for new use. This can mean converting their original use into something functional for the current surrounding area, such as housing, workspaces, community centers, or mixed-use creative venues. Combating climate change is an additional benefit of building reuse through sustainable practices. Omgivning believes that adaptive reuse of buildings can help solve housing issues and the climate crisis in cities everywhere.

100 North Main is a mid-century skyscraper in the city of Memphis, Tennessee, and presents itself as an ideal case study for large-scale adaptive reuse. This once-thriving building in a former bustling neighborhood has now seen better days (a common story in cities nationwide). Built in 1965, the tallest building in Memphis has been empty since 2016. Reusing this building can create a sense of place by reviving a forgotten part of downtown, energizing it with a modern aesthetic for both living and working. 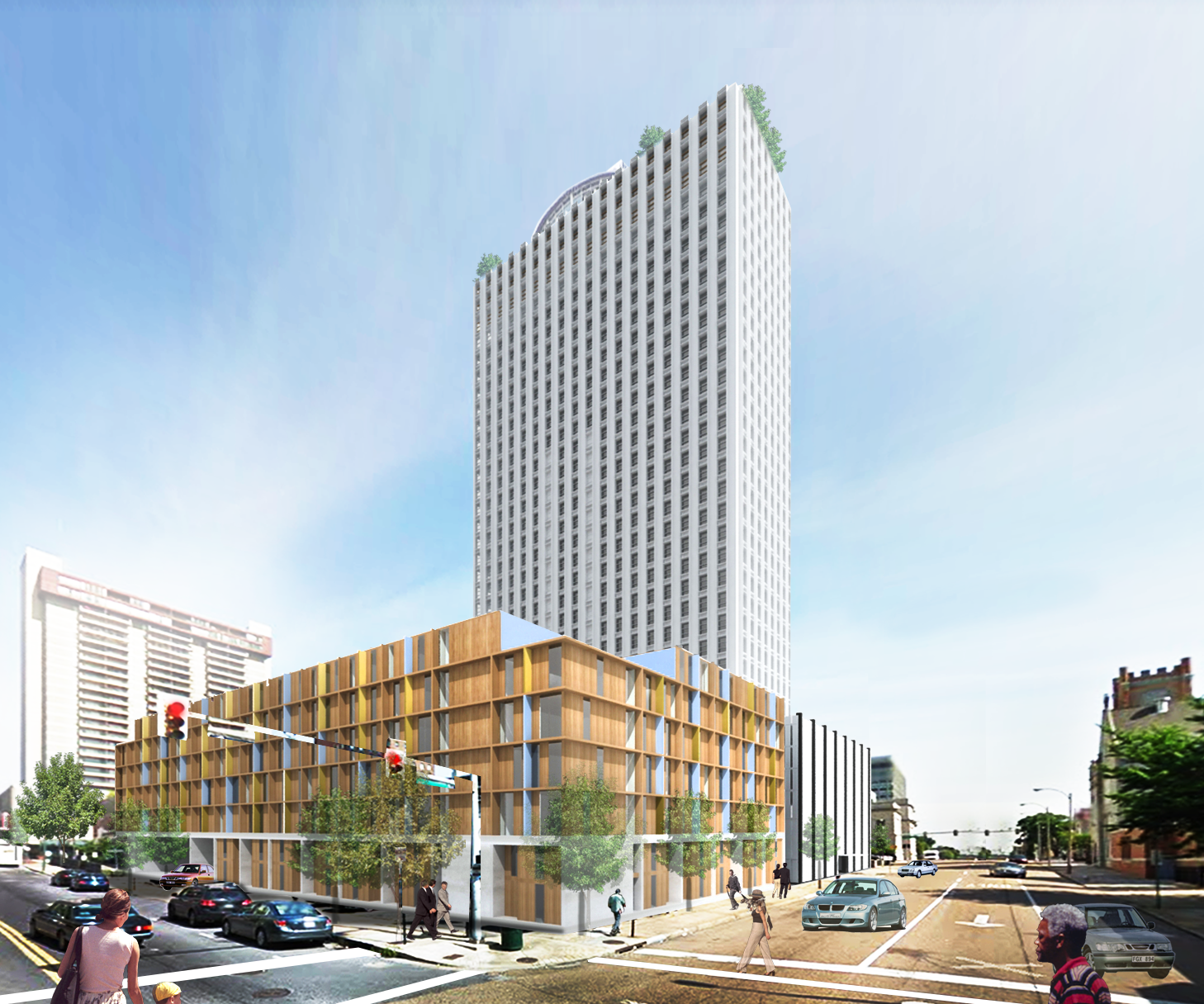 Cities all over the country are grappling with an aging stock of high-rise buildings. The trend has been to move outward, creating urban sprawl which is defined as unrestricted growth in urban areas of housing, commercial development, and roads over large expanses of land, with little concern for urban planning. The pandemic did not help the situation, leaving center cities with very little action. Omgivning believes in revitalization by building back a thriving community and driving density back into once dense neighborhoods with the adaptive reuse of existing buildings.

Using the tallest building in Memphis, Tennessee as a case study, Omgivning takes a deep dive into activating an inactive block of downtown Memphis, realizing its potential as a diverse and vibrant community.

100 North Main
Built in 1965, 100 North Main is a 37-story, midcentury skyscraper. Once a bank and office building, it is listed on the National Register of Historic Places. It has been vacant since 2016.

This building and the block surrounding is a canvas for rebuilding a community that can act as a catalyst for economic development throughout downtown Memphis. Omgivning and Development Group 18 Main explores turning this historic building into 542 affordable housing units, offering a broad range of unit types to support a diversity of user/family needs. 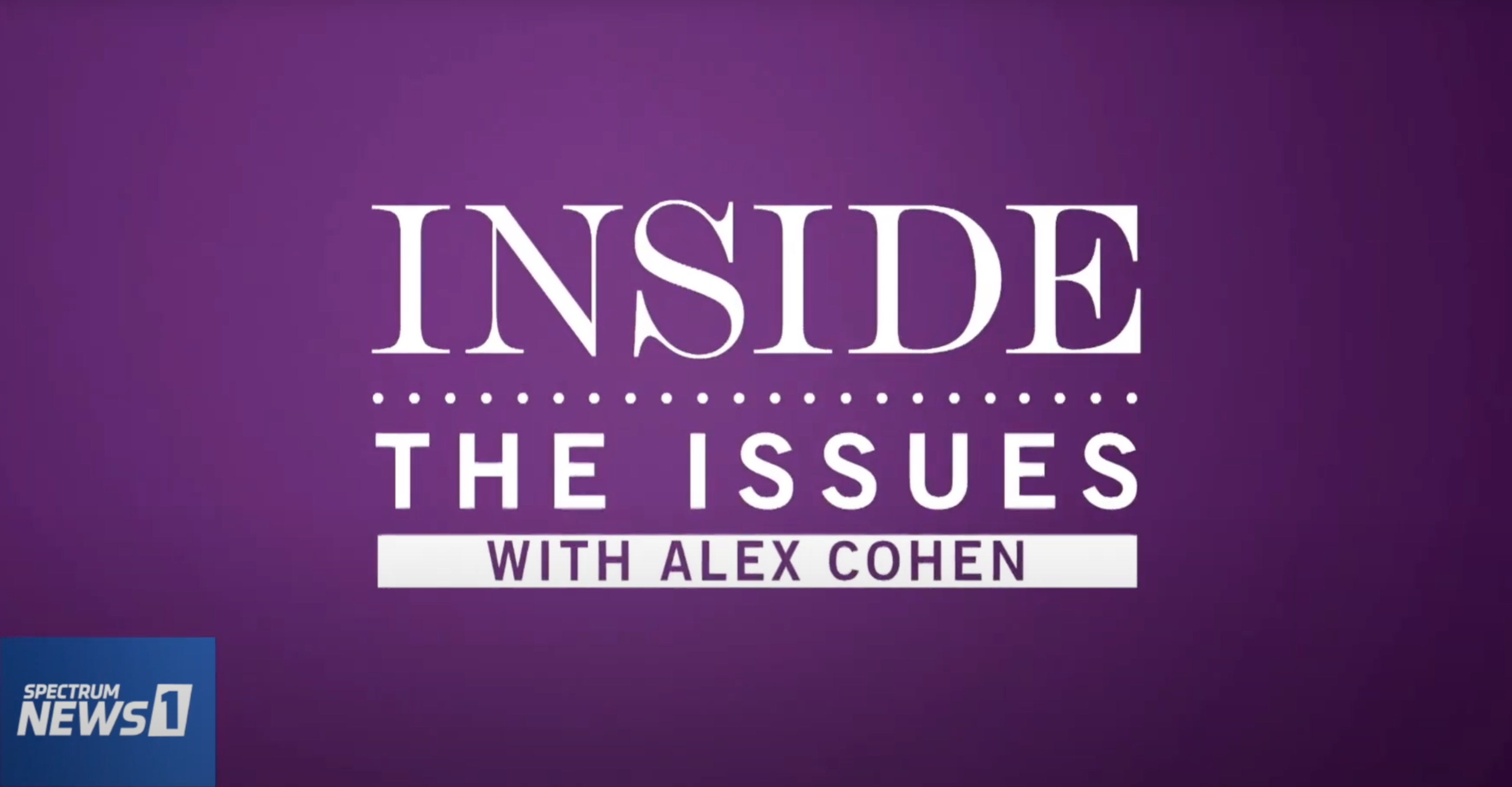 "Inside the Issues" is a show on Spectrum News 1 SoCal, hosted by Alex Cohen. In the May 2022 episode, Cohen interviews experts from across Southern California to discuss the state's growing housing affordability crisis. Omgivning Found and Principal, Karin Liljegren, FAIA is interviewed about the positive impact adaptive reuse has in sustainbility and in helping solve the Los Angeles housing crisis. 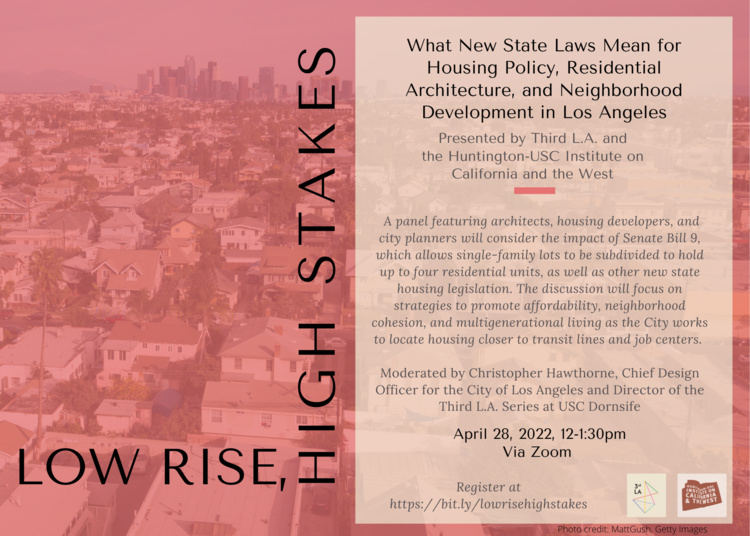 Omgivning's Karin Liljegren and Albert Escobar presented in a discussion about California's SB9 and their award winning concept for low-rise density buildings. Watch this clip for Liljegren and Escobar's portion of the panel

Co-sponsored by Third LA and the Huntington-USC Institute on California and the West, this panel features architects, housing experts, and city planners that will consider the impact of Senate Bill 9, which allows single-family lots to be subdivided to hold up to four residential units, as well as other new state housing legislation. The discussion focused on strategies to promote affordability, neighborhood cohesion, and multigenerational living as the City works to locate housing closer to transit lines and job centers.

Moderated by Christopher Hawthorne, Chief Design Officer for the City of Los Angeles and Director of the Third L.A. Series at USC Dornsife, the panel also featured Thomas Robinson and Michael Faulkner from LEVER Architecture; Matt Glesne and Sarah Molina-Pearson from Los Angeles Department of City Planning; and Alejandro Gonzalez from Genesis LA.

Airtalk on KPCC 89.3 talks to Karin about Adaptive Reuse 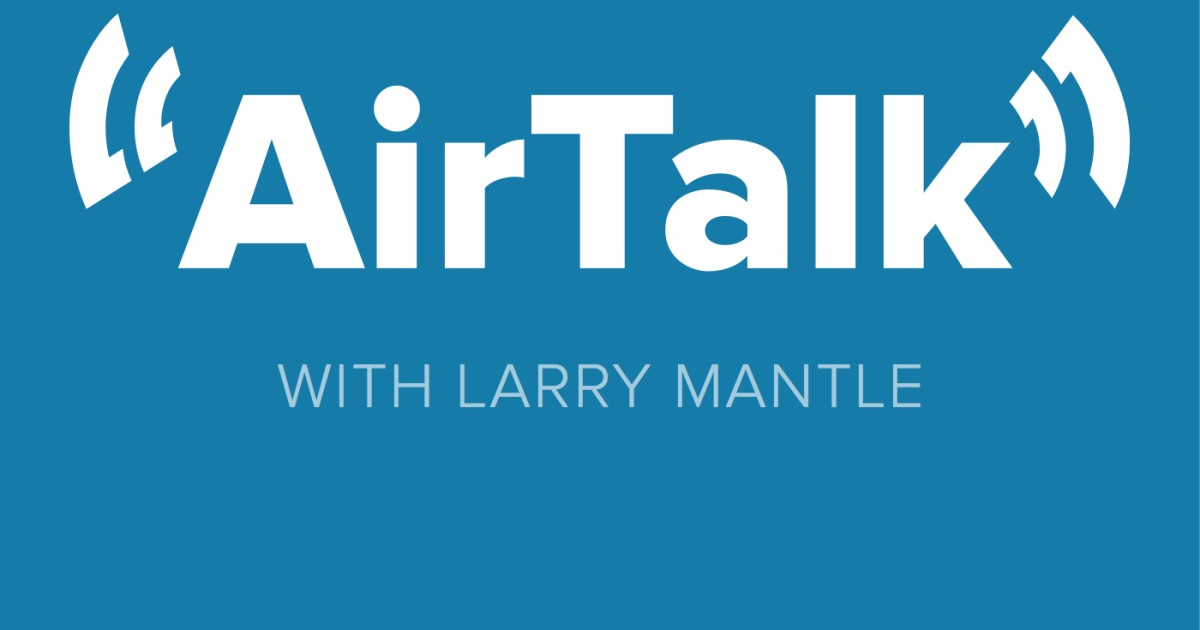 Could L.A.’s Empty Office Buildings Be Turned Into Housing? The Answer Is Complicated

With more Californians working from home during the pandemic - and with some companies planning to make that remote work permanent - a lot of Los Angeles office buildings are sitting vacant at the same time the city is in the midst of a severe housing crisis. Could the former be the solution to the latter? Enter adaptive reuse, the practice of repurposing existing buildings for new uses. The Metropolitan Building in downtown L.A. is one example: it originally contained medical offices and shops; now it’s home to loft apartments. However, not every office building is so easily adapted. The shape and design of the original space are all key factors that affect the viability of an adaptive reuse project. On this episode of AirTalk, Larry discusses the visions and challenges of adaptive reuse in Los Angeles with founder of the adaptive reuse architecture firm Omgivning, Karin Liljegren. 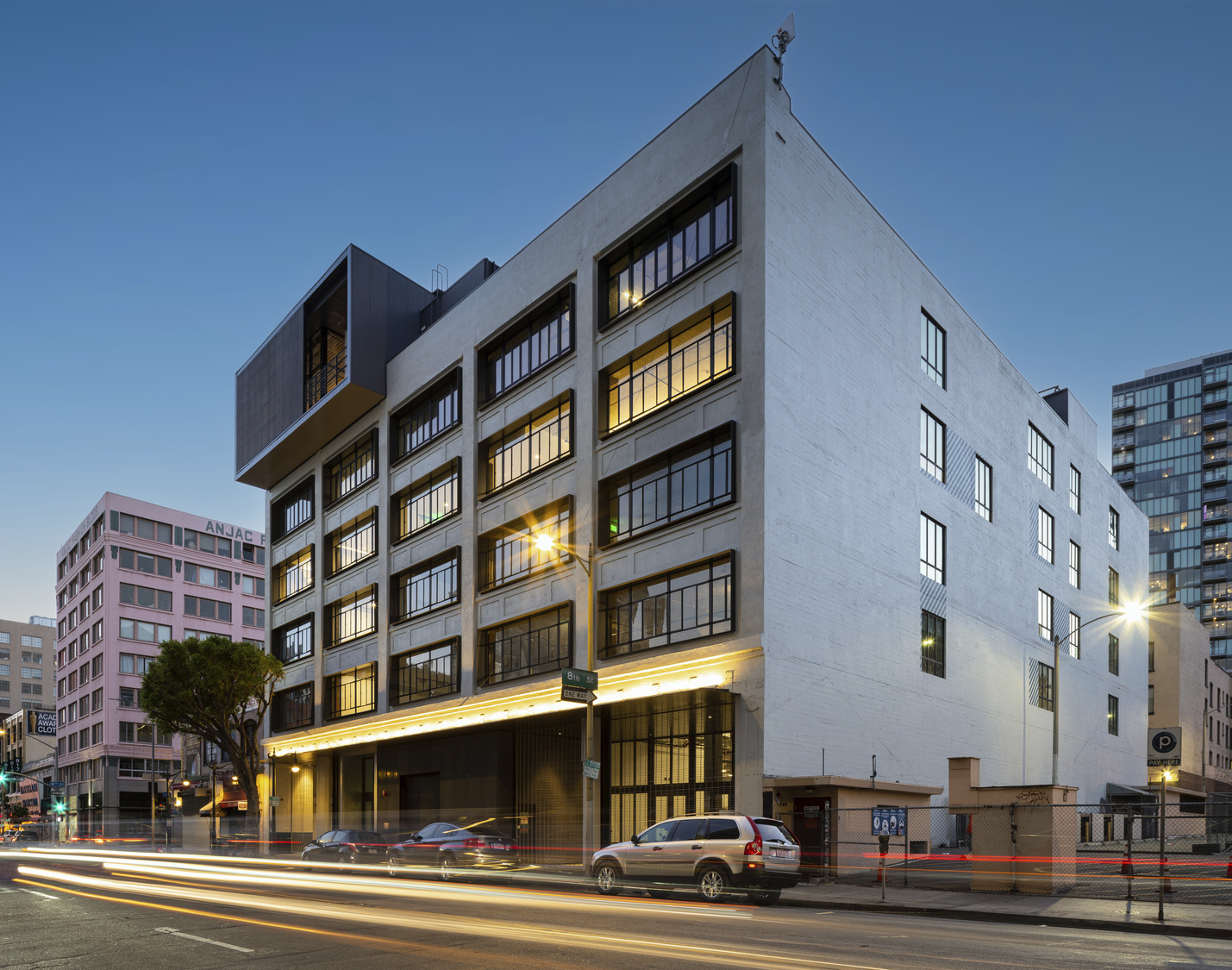 This project was completed in 2021 in conjunction with developers Urban Offerings, Swinteron as the General Contractor, Lynch Eisinger as the Design Architect, and Omgivning as the Executive Architect and Architect of Record. 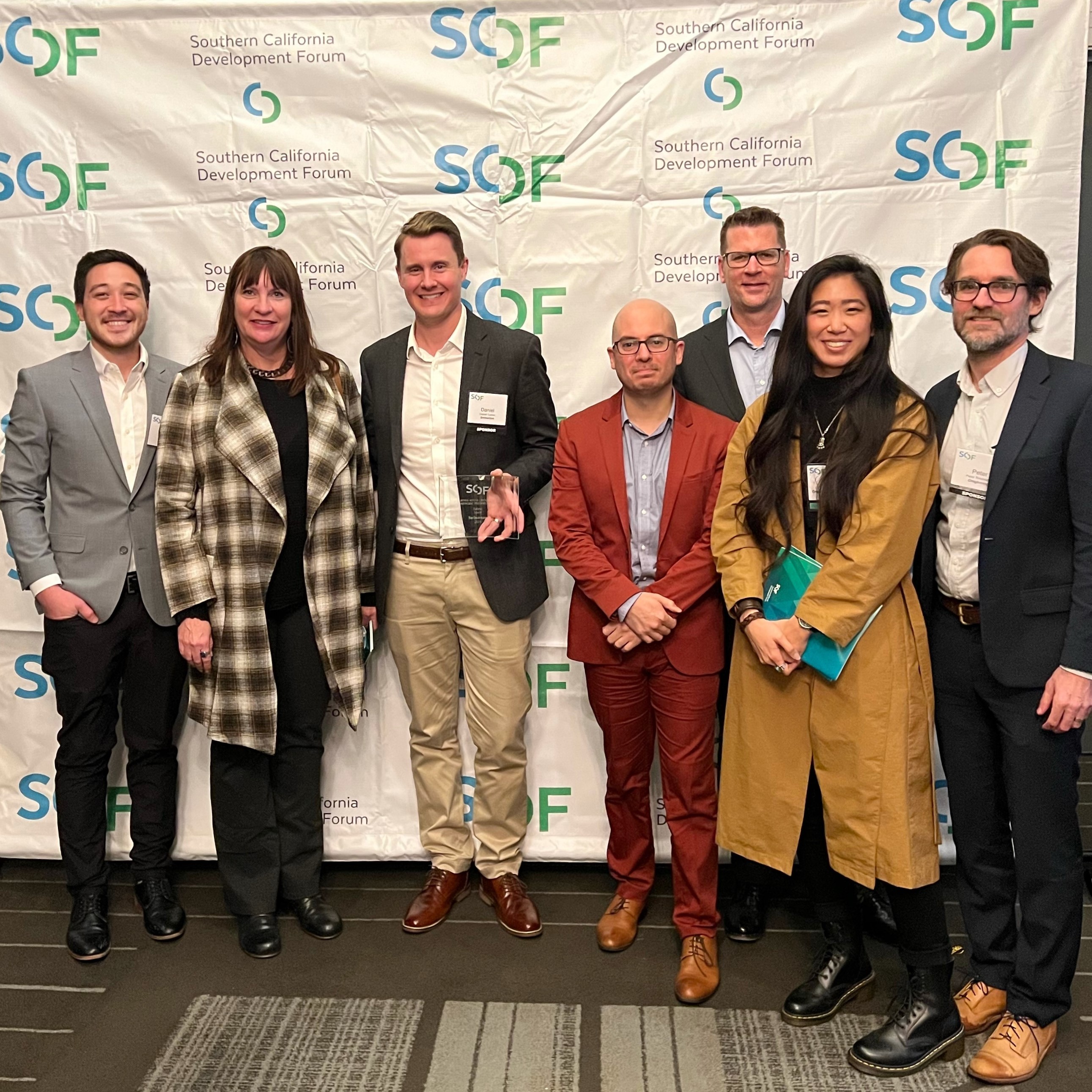 The awards were in December 2021 at the California Club.
Pictured above with the Omgivning team Karin Liljegren, Benjamin Ferrarioli, Hana Ogita, Peter Rindelaub, with Dean Nucich of Urban Offerings and the crew at Swinerton. 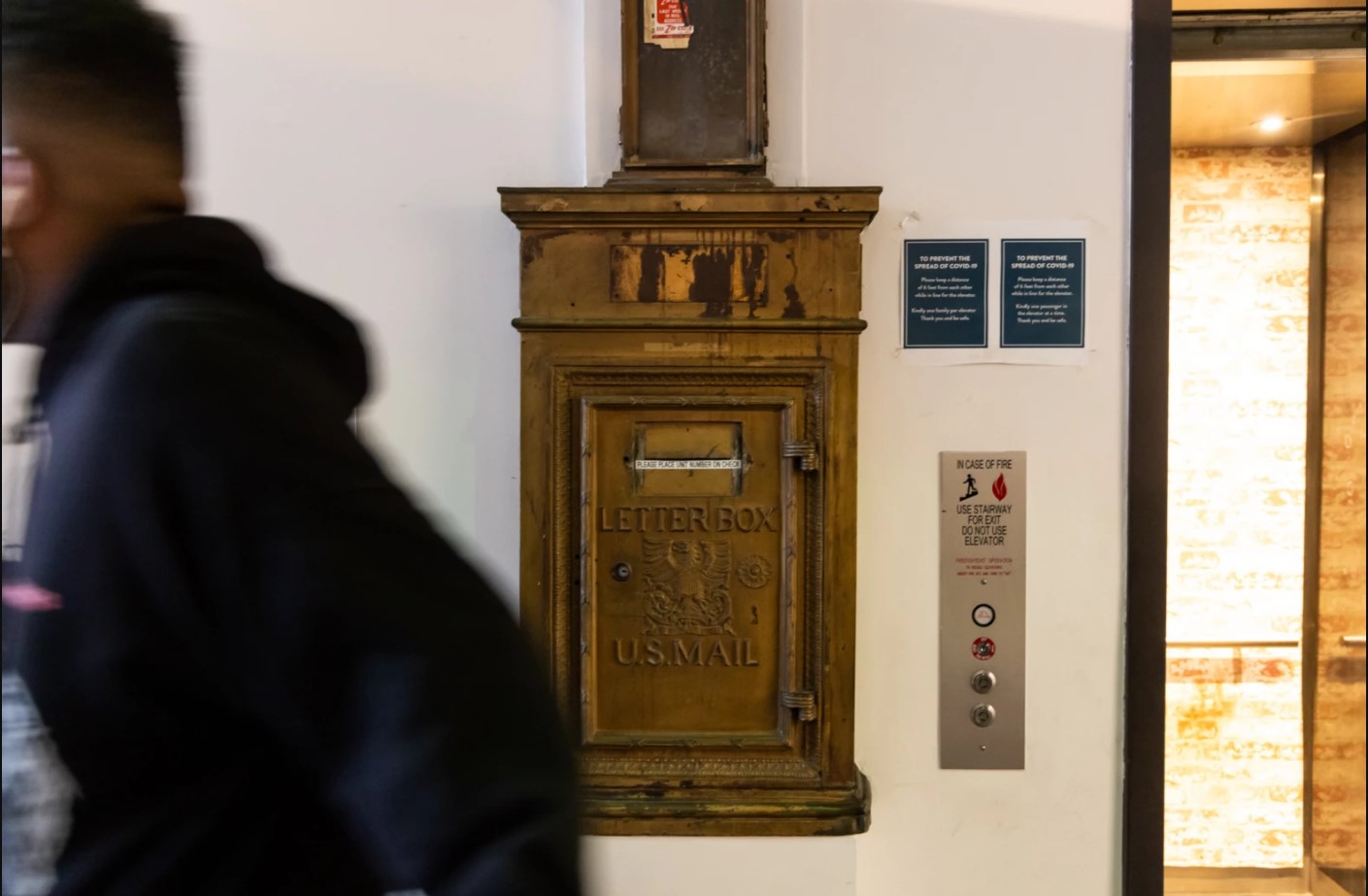 "As Workers Stay Remote, Can LA Turn Empty Offices Into Housing?" by David Wagner for the LAist.

Many Californians have been working from home throughout the COVID-19 pandemic, and some companies plan to let their workers stay fully remote.

So what happens to all those empty offices?

With Los Angeles in the midst of a severe housing crisis, some see promise in turning dormant office buildings into apartments through “adaptive reuse.”

“I definitely think that more and more office space will be turned into housing — and it should be,” said Karin Liljegren, founder and principal of L.A.-based architecture firm Omgivning, which specializes in adaptive reuse.

The audio version of this article can be heard below. 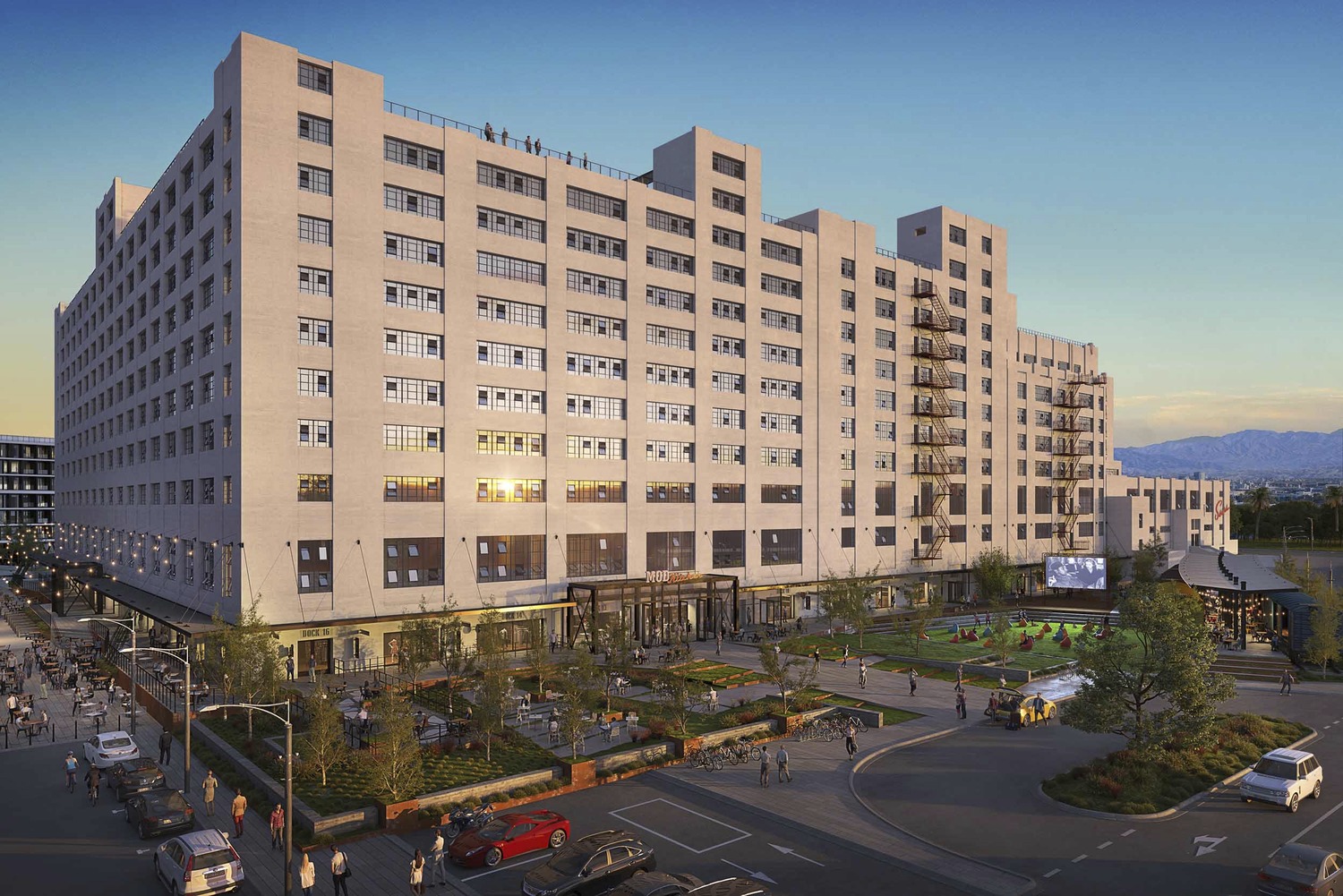 CREative Media focuses on podcasts, webinars, and interviews about commercial real estate development, investment, and architecture. Our very own Roberto Vazquez was a guest on CREative Media's podcast. He was interviewed about our favorite subject, Adaptive Reuse. He talks about it's importance and it's benefits to the community that reaches beyond Los Angeles. 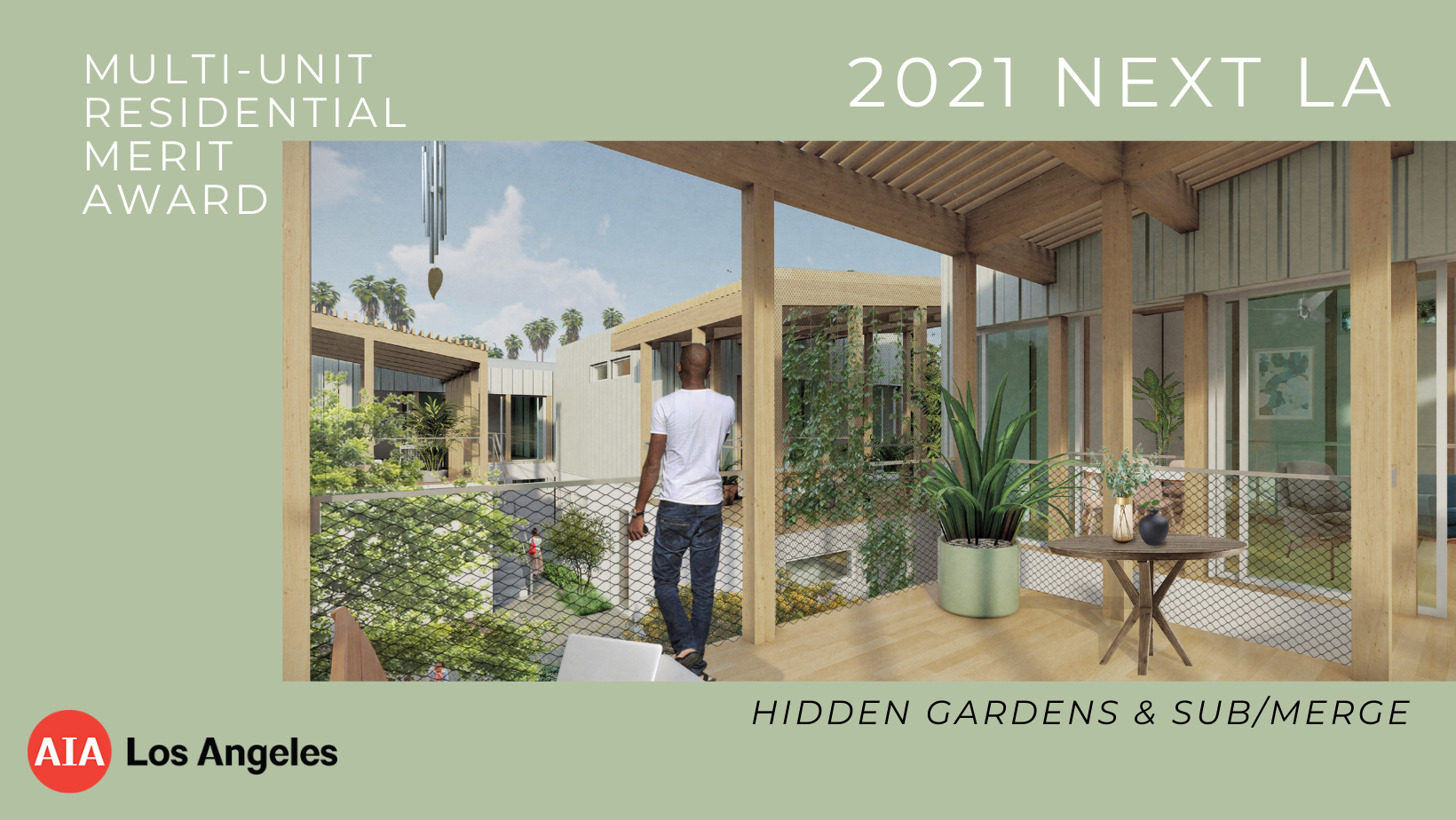 Omgivning is the 2021 AIA Los Angeles Design Awards recipient of the Next LA Multi Unit Residential Merit Award for both Hidden Gardens and Sub/Merge.

These are the two entries that we submitted and won for the Los Angeles Low Rise Challenge from earlier in the year. Both concepts focus on creating community-based housing using existing lots in the city.

AIA Los Angeles had two events in the Fall of 2021, one live at SoFi Stadium where Karin accepted the award, and a virtual event where lead designer Albert Escobar spoke a bit about the project and the win.

Watch this portion of the acceptance speech (it's only three and a half minutes). 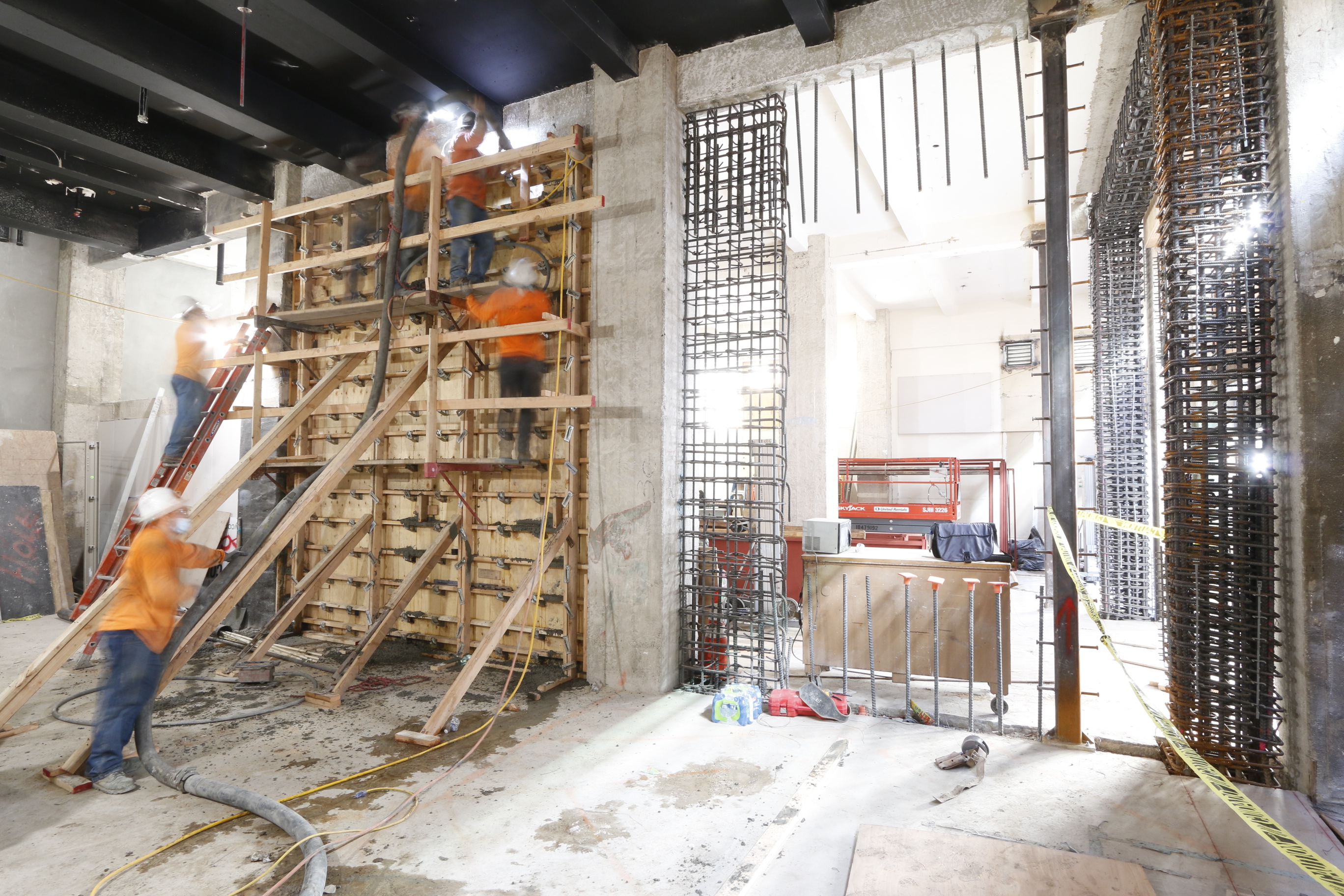 Thinking Beyond The Ordinance

An Omgivning-led white paper report aims to contribute ideas and solutions for Los Angeles' post-earthquake resilience of non-ductile concrete buildings. To better prepare for Southern California’s next big earthquake, we spearheaded a team of stakeholders, including architects, engineers, city agencies and advocacy groups, with a white paper seeking to provide recommendations to reform the City of L.A.’s Non-Ductile Concrete (NDC) Ordinance. Constituting most concrete buildings erected before the 1976 L.A. City Building Code, “Non-Ductile” buildings are often brittle or inflexible due to minimal steel reinforcing, and therefore have not been safely reinforced to sustain earthquake damage. As currently written, L.A.’s NDC Ordinance requires all concrete buildings designed prior to January 13, 1977 to achieve minimum structural requirements within 25 years, or be demolished.